Uruguay is a small country located in South America, bordered by Brazil and Argentina. It is the second-smallest country on the continent and is known for its stunning landscapes, vibrant culture, and friendly people. 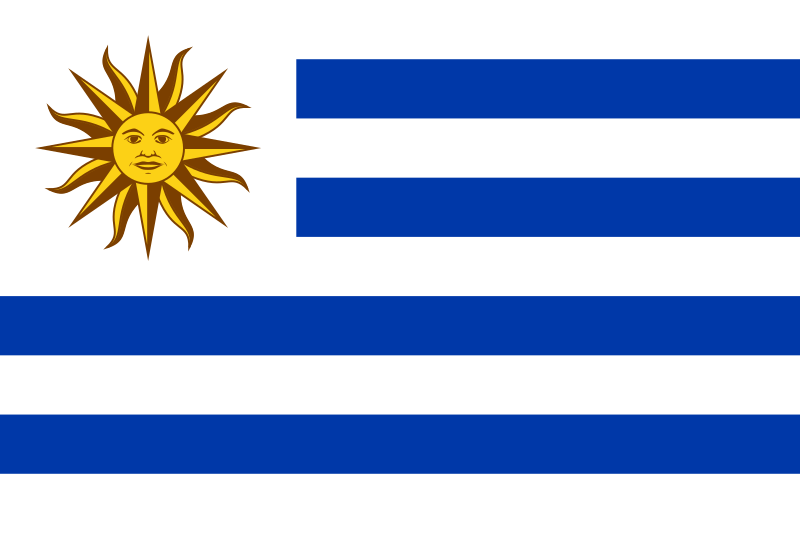 Uruguay is a popular tourist destination due to its beautiful beaches, stunning countryside, and vibrant cities. Montevideo, the capital of Uruguay, is known for its rich history, vibrant culture, and colonial architecture. The city is also home to a number of museums, galleries, and theaters, making it an ideal destination for art and culture lovers.

Uruguay is also known for its rich agricultural industry, producing a variety of crops such as wheat, corn, and soybeans. The country is also home to a number of national parks, offering visitors the chance to explore the stunning natural beauty of Uruguay. From the stunning beaches of Punta del Este to the lush forests of the interior, Uruguay is a country with something for everyone.

Brazil is a country located in South America and is the fifth largest country in the world. It is bordered by Argentina, Bolivia, Colombia, Guyana, Paraguay, Peru, Suriname, Uruguay, and Venezuela. Brazil is a vibrant country with a rich culture and diverse population.

Brazil is the largest country in South America and is home to the world’s largest tropical rainforest, the Amazon. It is also home to the world’s largest river, the Amazon River. Brazil is known for its beautiful beaches, vibrant cities, and its lively culture. It is also known for its diverse population, with people from all over the world making up the population.

Brazil is a major economic power in South America and is one of the world’s largest exporters of coffee, soybeans, and sugar. It is also a major producer of iron ore, gold, and other minerals.

Argentina has a diverse population, with most of the population being of European descent. The official language is Spanish, and the main religion is Roman Catholicism. The country is known for its rich culture, and its vibrant music and dance scene. It is also known for its beautiful landscapes, with the Andes mountains and the Pampas grasslands being some of the most popular attractions.

Argentina is an important economic power in South America, with a strong manufacturing and agricultural sector. It is also a major producer of oil, and is home to some of the world's largest reserves of natural gas.

What is Uruguay known for?

Uruguay is a small South American country situated between Argentina and Brazil. The country is known for its laid-back culture, stunning landscapes, and friendly people. Uruguay is also known for its unique history and culture, as well as its beautiful beaches and vibrant nightlife.

Uruguay is also known for its vibrant music and art scene. The country is home to a variety of musical styles, including tango, candombe, and murga. Additionally, Uruguay is known for its art galleries, which feature the works of local and international artists.

What race lives in Uruguay?

Uruguay is a small South American country located between Brazil and Argentina. It is home to a diverse population, with a variety of different ethnic backgrounds and cultures. The majority of Uruguayans are of European descent, primarily from Spain and Italy. Other ethnic groups include Afro-Uruguayans, descendants of African slaves, and Mestizos, people of mixed European and indigenous ancestry.

Coat of arms of Uruguay

Uruguay (/ˈjʊərəɡwaɪ/ (listen);[10] Spanish: [uɾuˈɣwaj] (listen)), officially the Oriental Republic of Uruguay (Spanish: República Oriental del Uruguay), is a country in South America. It shares borders with Argentina to its west and southwest and Brazil to its north and northeast; while bordering the Río de la Plata to the south and the Atlantic Ocean to the southeast. It is part of the Southern Cone region of South America. Uruguay covers an area of approximately 181,034 square kilometers (69,898 sq mi) and has a population of an estimated 3.4 million, of whom around 2 million live in the metropolitan area of its capital and largest city, Montevideo.

The area that became Uruguay was first inhabited by groups of hunter-gatherers 13,000 years ago.[11] The predominant tribe at the moment of the arrival of Europeans was the Charrúa people when the Portuguese first established Colónia do Sacramento in 1680; Uruguay was colonized by Europeans later relative to neighboring countries. The Spanish founded Montevideo as a military stronghold in the early 18th century because of the competing claims over the region. Uruguay won its independence between 1811 and 1828, following a four-way struggle between Portugal and Spain, and later Argentina and Brazil. It remained subject to foreign influence and intervention throughout the 19th century, with the military playing a recurring role in domestic politics. A series of economic crises and the political repression against left-wing guerrilla activity in the late 1960s and early 1970s put an end to a democratic period that had begun in the early 20th century,[clarification needed] culminating in the 1973 coup d'état, which established a civic-military dictatorship. The military government persecuted leftists, socialists, and political opponents, resulting in several deaths and numerous instances of torture by the military; the military relinquished power to a civilian government in 1985. Uruguay is today a democratic constitutional republic, with a president who serves as both head of state and head of government.

Uruguay is ranked first in Latin America in democracy, peace, low perception of corruption,[12] and e-government.[13][14] It is the lowest ranking South American nation in the Global Terrorism Index and ranks second in the continent on economic freedom, income equality, per-capita income, and inflows of FDI.[12] Uruguay is the third-best country on the continent in terms of Human Development Index, GDP growth,[15] innovation, and infrastructure.[12] Uruguay is regarded as one of the most socially progressive countries in Latin America.[16] It ranks high on global measures of personal rights, tolerance, and inclusion issues,[17] including its acceptance of the LGBT community.[18] The country has legalized cannabis, same-sex marriage, prostitution and abortion. Uruguay is a founding member of the United Nations, OAS, and Mercosur.